Disney’s Polynesian Village Resort reopened on July 19 and fan favorite restaurant,’Ohana, opened its doors once again just over a week ago with some changes to the menu.  First, let me start by saying that we had an opportunity to see the new Moana themed rooms at the resort and the Walt Disney Imagineers did an amazing job with them.  After reading many comments online of various opinions of the dinner menu, we went with very open minds in hopes that the dinner will be as good as it was before ‘Ohana closed over a year ago. 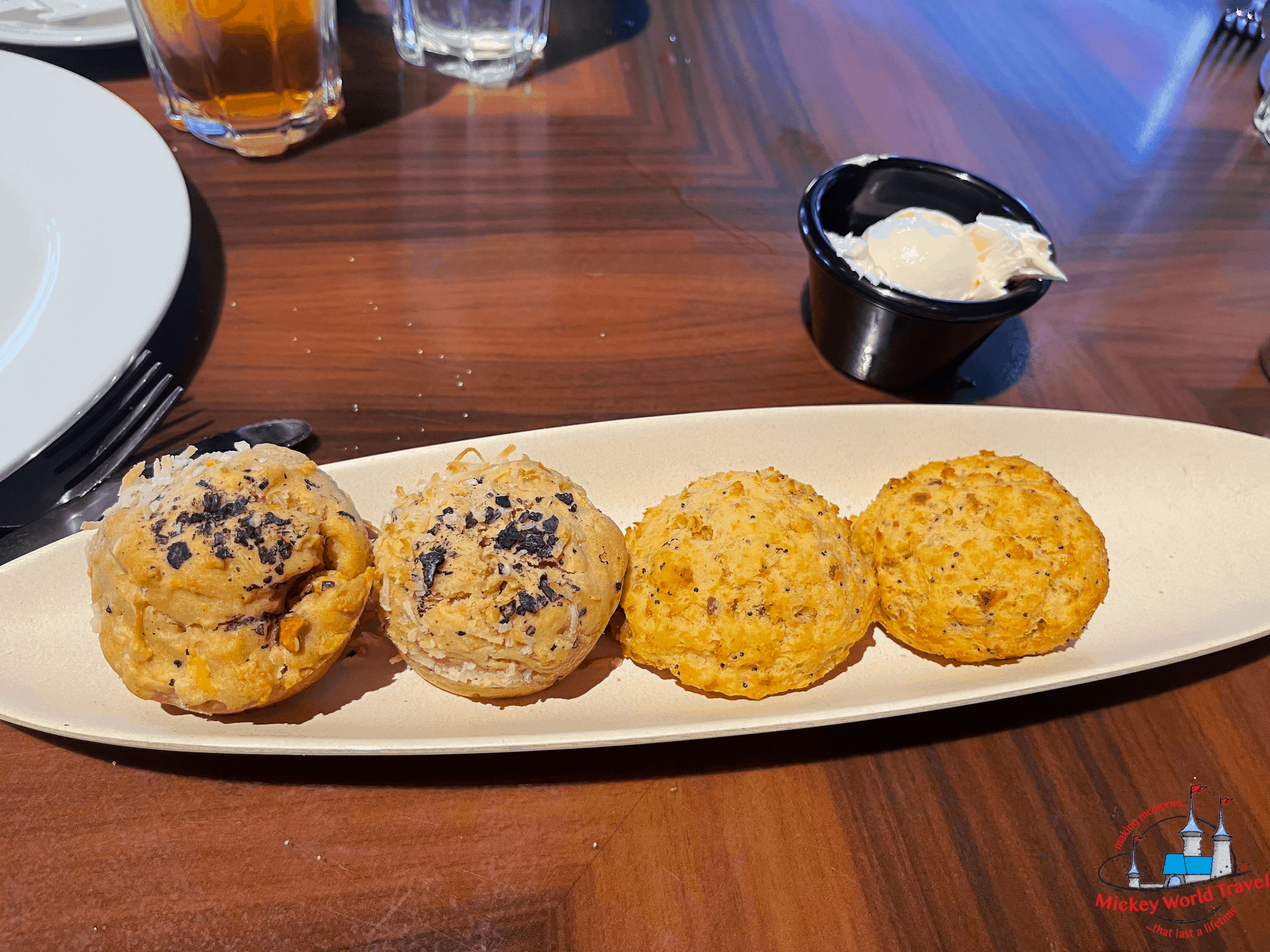 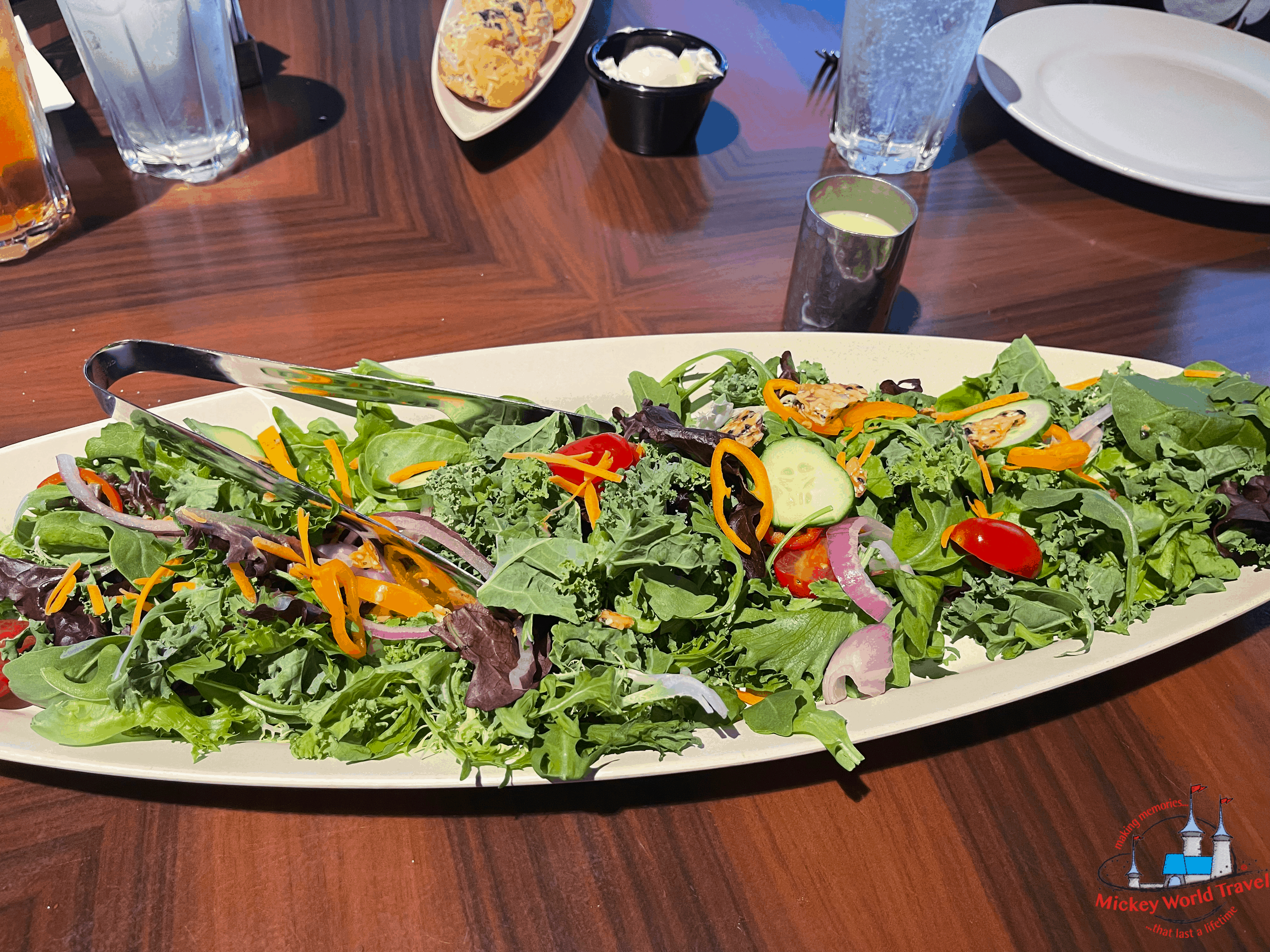 Our meal started with a new bread service, Coconut-Papaya Scones and Cheddar Bacon Biscuits which were a nice new addition. This was followed up by the salad course which was very similar to what it previously was. The biggest change was how it was served with dressing on the side. 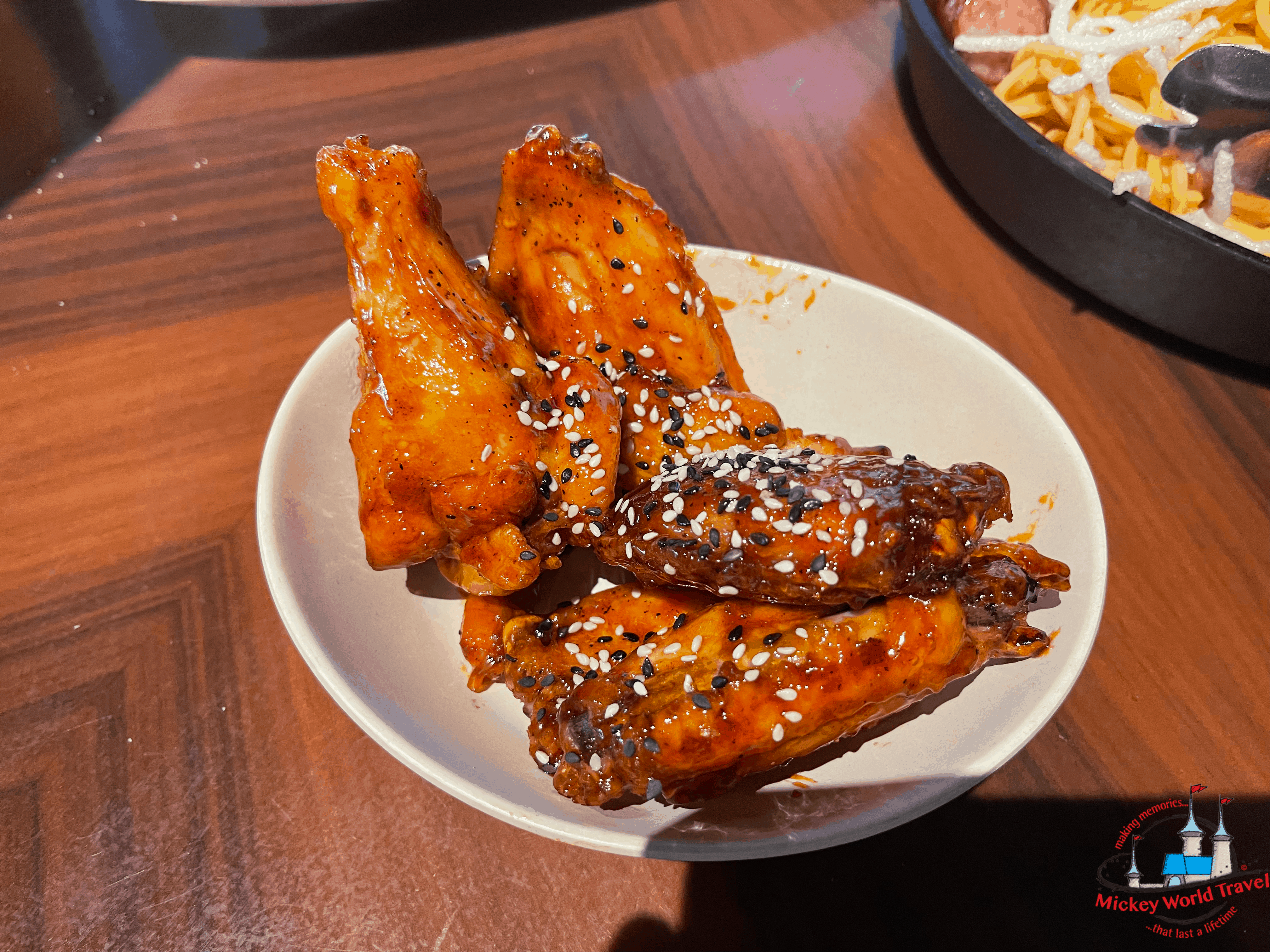 Next came the Honey-Coriander Chicken Wings, which were tasty but a little on the messy side to eat.  Gone from your meal are the hot washcloths which made it easy to eat the wings in the past. One cloth napkin and additional paper napkins are not going to do the job for these wings. 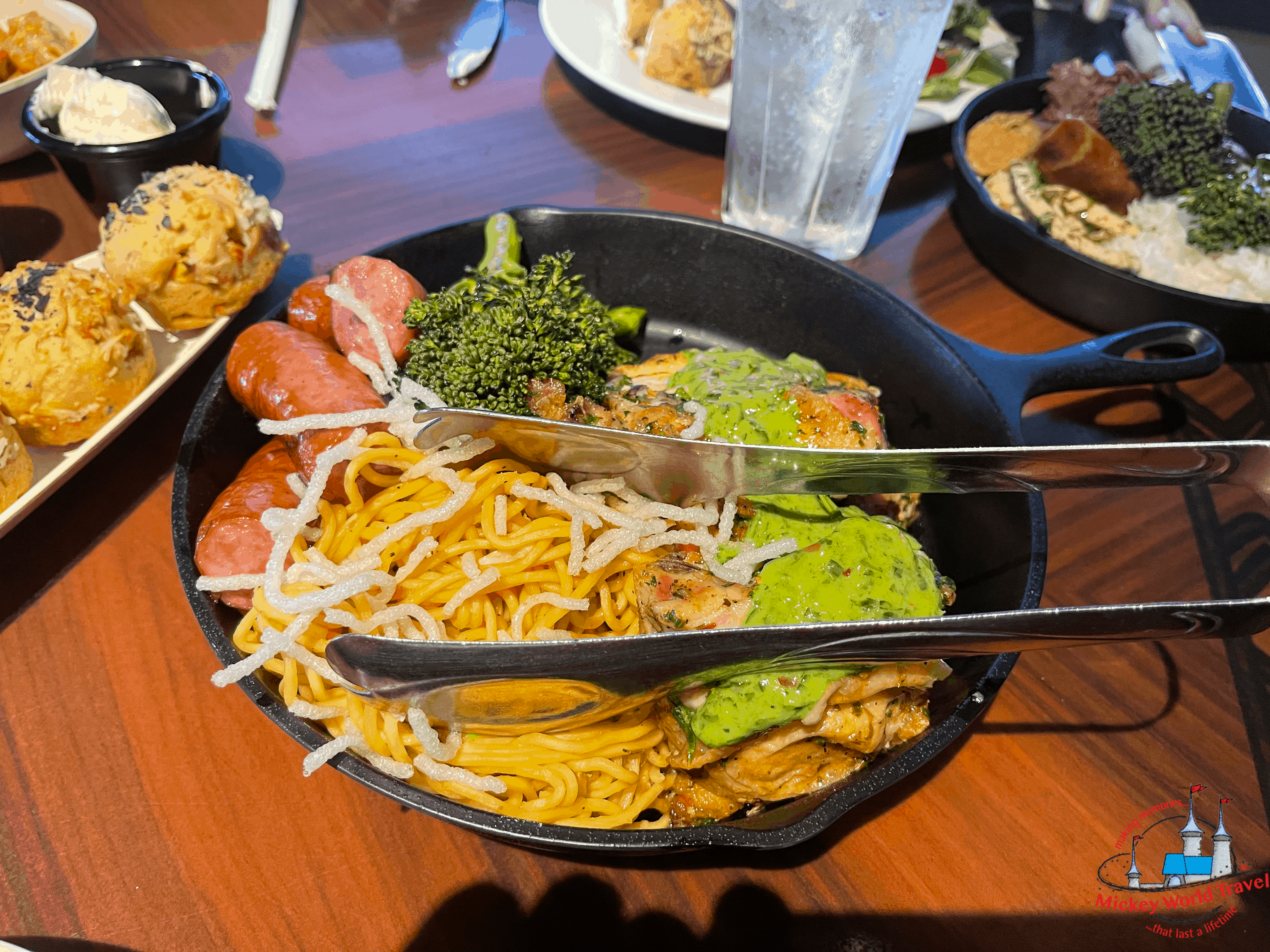 The famous ‘Ohana Noodles are back after the online uproar over their brief removal when the new menu was announced. In the end, the noodles were as delicious as ever! However, the vegetables which consisted of just Roasted Broccolini and Kielbasa Sausage were a letdown and just didn’t seem to fit with the overall menu. 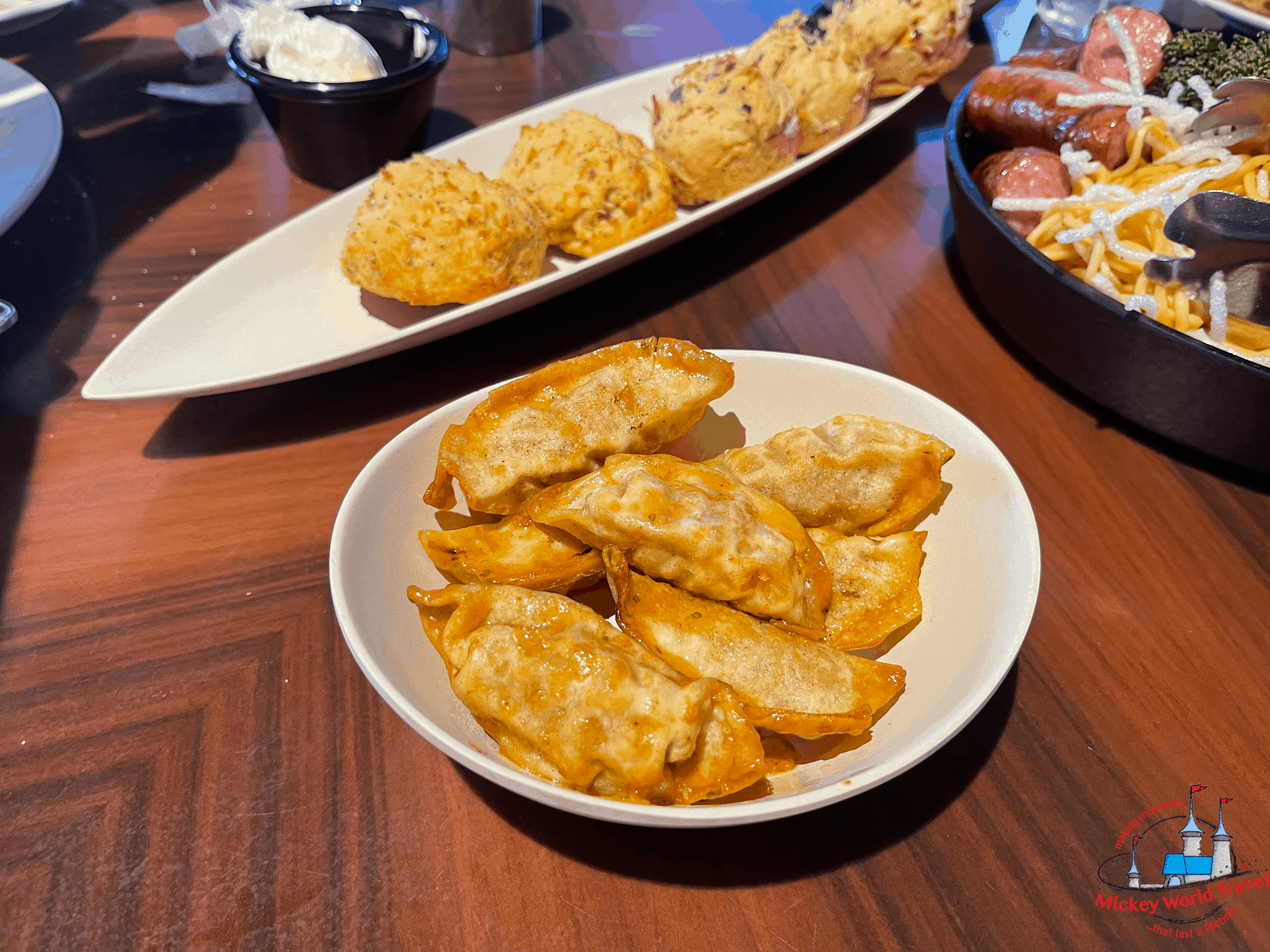 The Pork Dumplings Tossed in Garlic-Chilli Sauce came out along with the skillet and they did not disappoint! They tasted exactly the same as they have in the past. 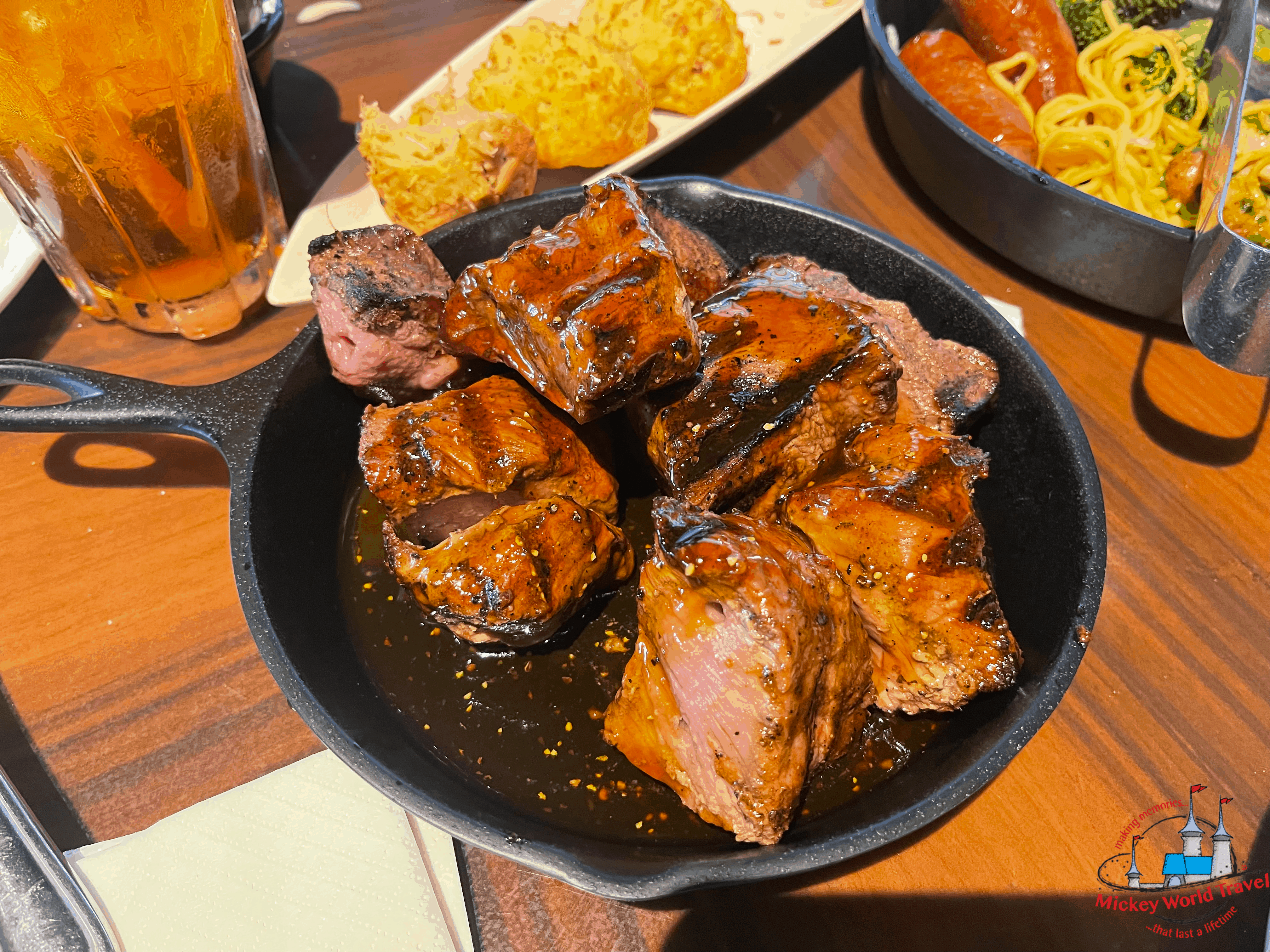 The steak, chicken, and shrimp were next.  Due to Covid-19, the skewers are no longer present. The steak is still cooked on the wood-fired grill in the center of the dining room just as before, but it is served in a skillet with teriyaki sauce that gave much more flavor than it previously had.

The chicken is now served on the bone including the breast, wings and legs roasted with a Chimichurri Sauce. Although the grilled chicken will be missed, the replacement was delicious and one of the best parts of the meal. The chicken is served along with the noodles, sausage, and broccolini in the skillet. 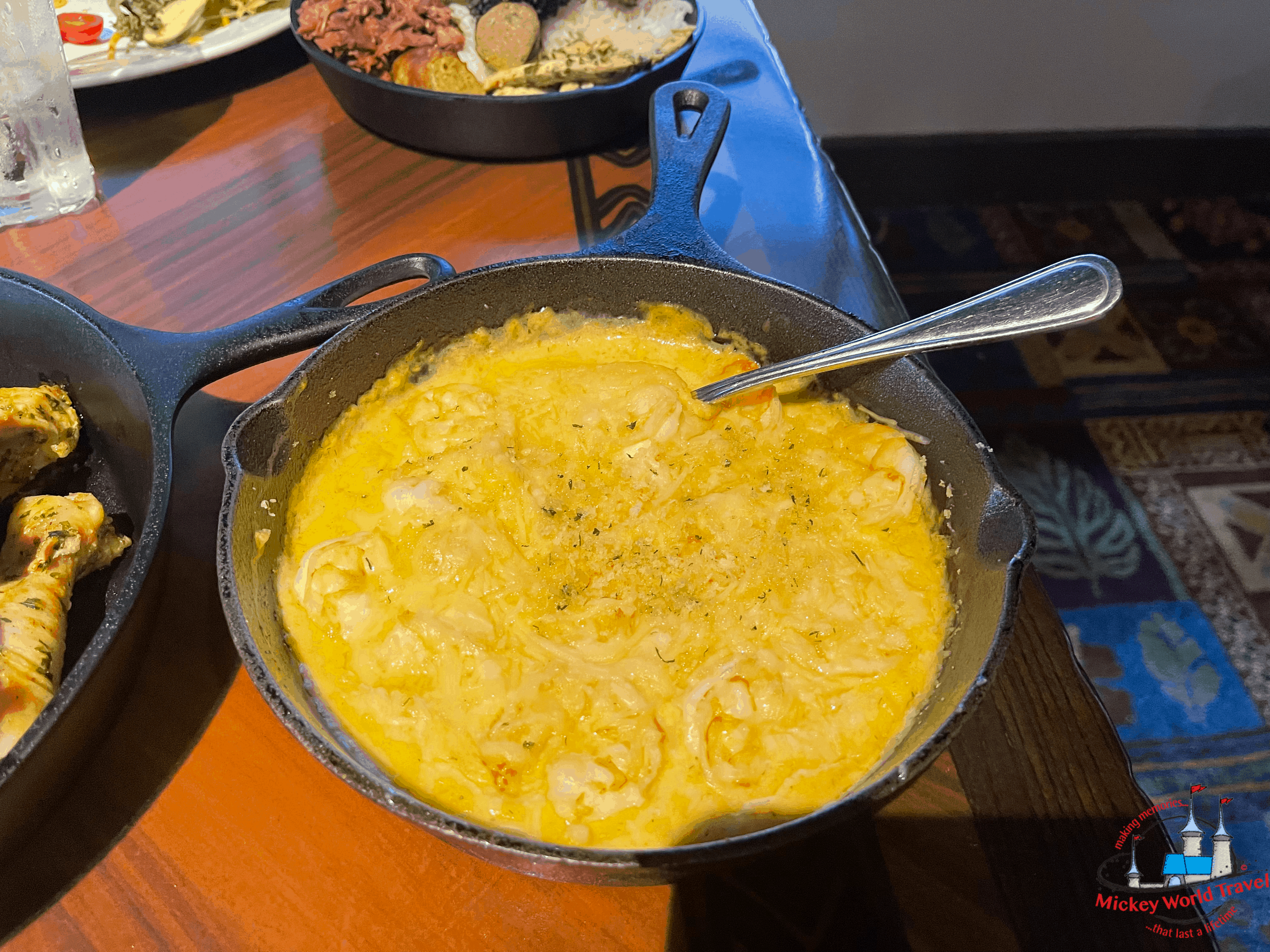 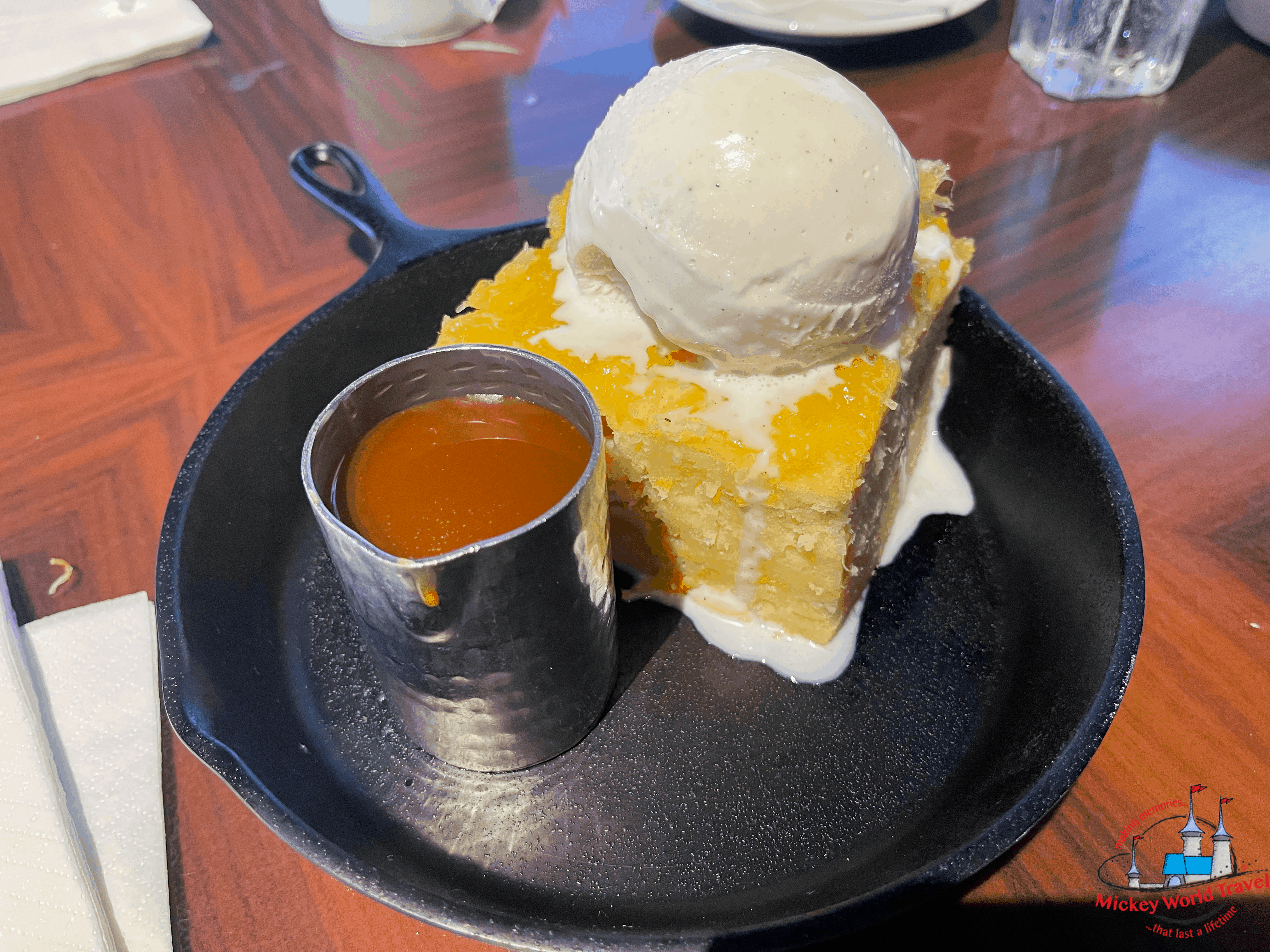 Finally it was time for dessert! We were so looking forward to the ‘Ohana signature Bread Pudding. Although there were some changes, they were just minor and made the dessert even better than before. The bread pudding had chunks of pineapple in it, and the Banana Foster Sauce was replaced with Caramel Sauce. Vanilla Ice Cream still topped the dessert.

Overall, dinner was great at ‘Ohana!  There were lots of changes to the menu. Some are good; some are okay.  Honestly, why fix something that’s not broken? We will definitely be returning to ‘Ohana for dinner in the near future!

To book your Disney vacation, contact our friends at Mickey World Travel. They will make sure you have the most magical vacation, by monitoring your booking for future discounts, as well as booking your dining reservations and Fast Passes once they return to the parks. 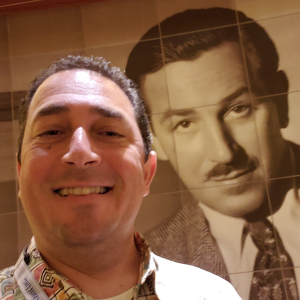 Ron is the founder of Mickey World Travel and loves everything about Disney Parks and Walt Disney, himself. When he's not planning a trip, he's on a Disney vacation or reading about Disney destinations.