Let’s take a step back in time to October 1, 1971, at the Magic Kingdom in Orlando, Florida. Opening day of Walt Disney World was long anticipated by the locals. Construction of the “Florida Project” began in 1960 with Walt’s idea of building an “Experimental prototype community of tomorrow” aka EPCOT.

Sadly Walt passed away in 1966 and his dream plan was left in the hands of his brother, Roy. The test bed for new city living innovations was no longer the grand plan. Construction started in 1967 to build a resort similar to Disneyland leaving the Epcot plan in the shadows. 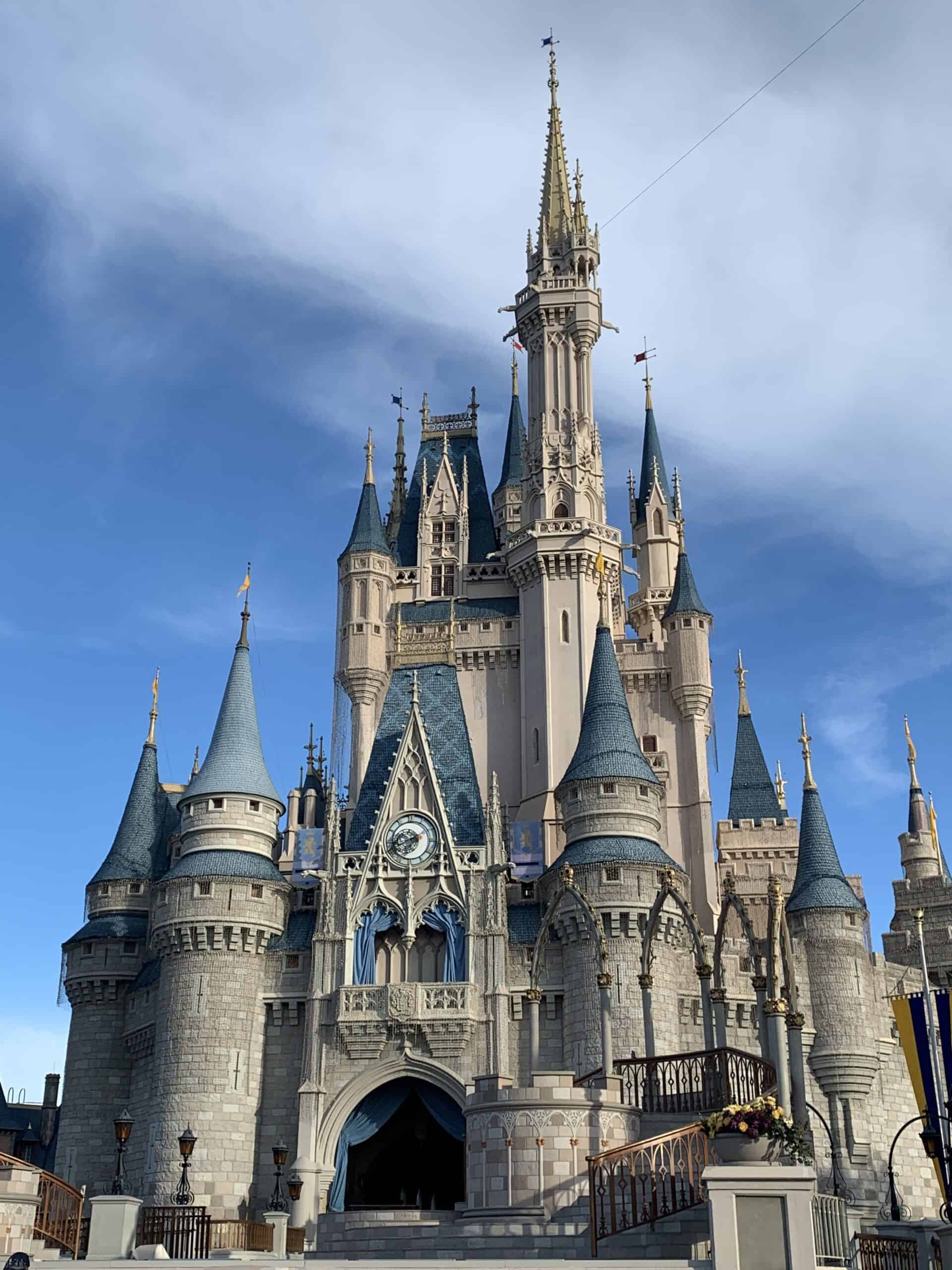 The idea was that Walt Disney World would be a year-round vacation destination that offered horseback riding, water sports, golf courses and of course the Magic Kingdom.

Mickey Mouse would be the focal point of this amusement park. Upon entering you could see Mickey’s face in a beautiful blend of flowers decorating the lawn at the main entrance of the Magic Kingdom.

Mickey Mouse also would be the one leading the frequent parades on Main Street, U.S.A. to greet all of the visitors. In addition, an animated speaking (audio animatronic) would lead an orchestra in the Mickey Mouse Revue. This attraction closed down in 1980 to be replaced by Mickey’s PhilharMagic. 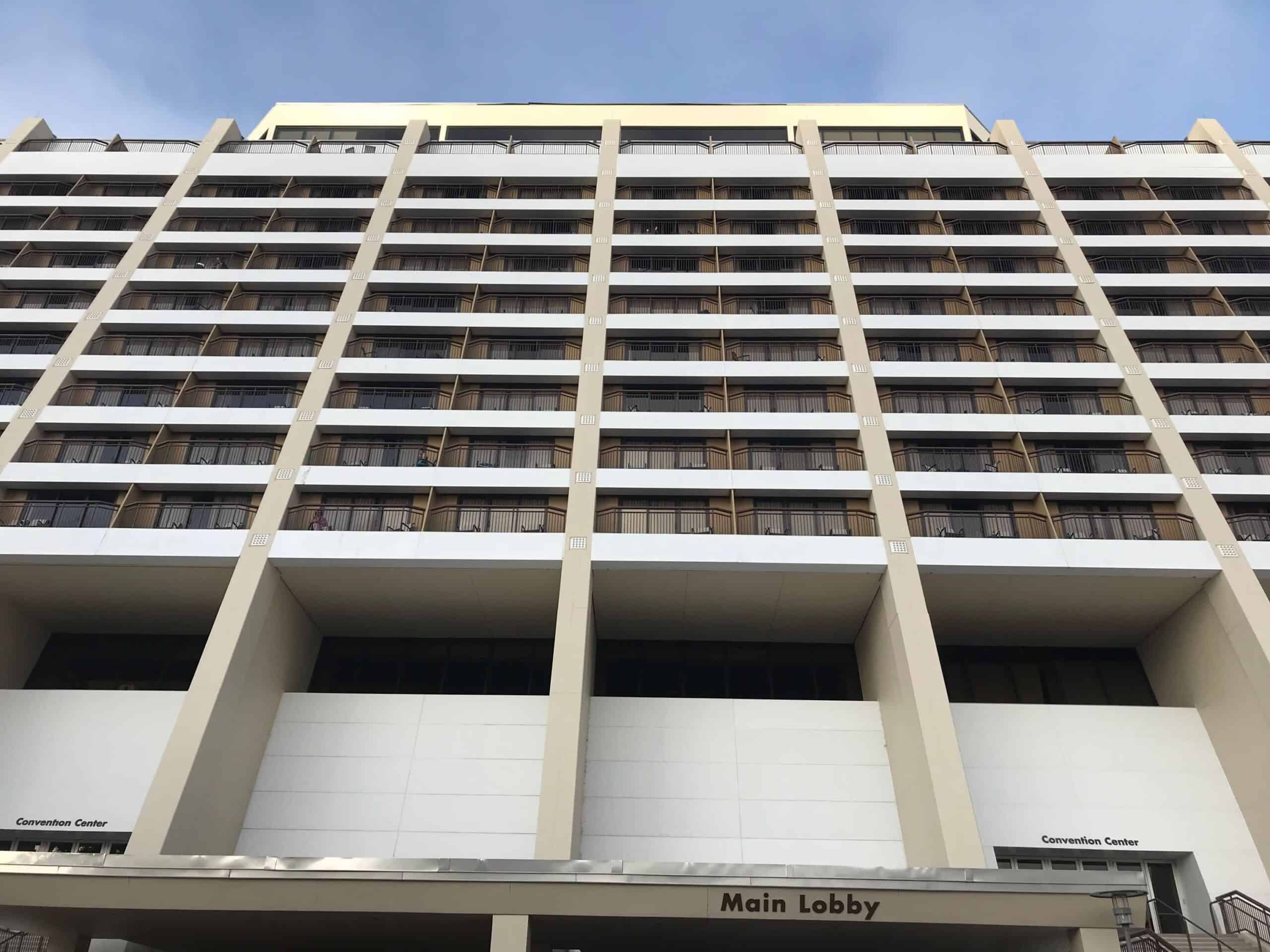 The resort prices ranged from $25-$44 per night. A monorail passing through the hotel would shuttle visitors to the park. In addition boats and trams were available for transportation.

After paying only $0.50 to park, the visitors could proceed to get to the Magic Kingdom via monorails or ferries. There were two original ferries named “Ports O’Call” and “The Southern Seas.” The side wheel steamers hosted 250 guests at a time. The monorail colors on opening day were orange, green, gold, and blue. 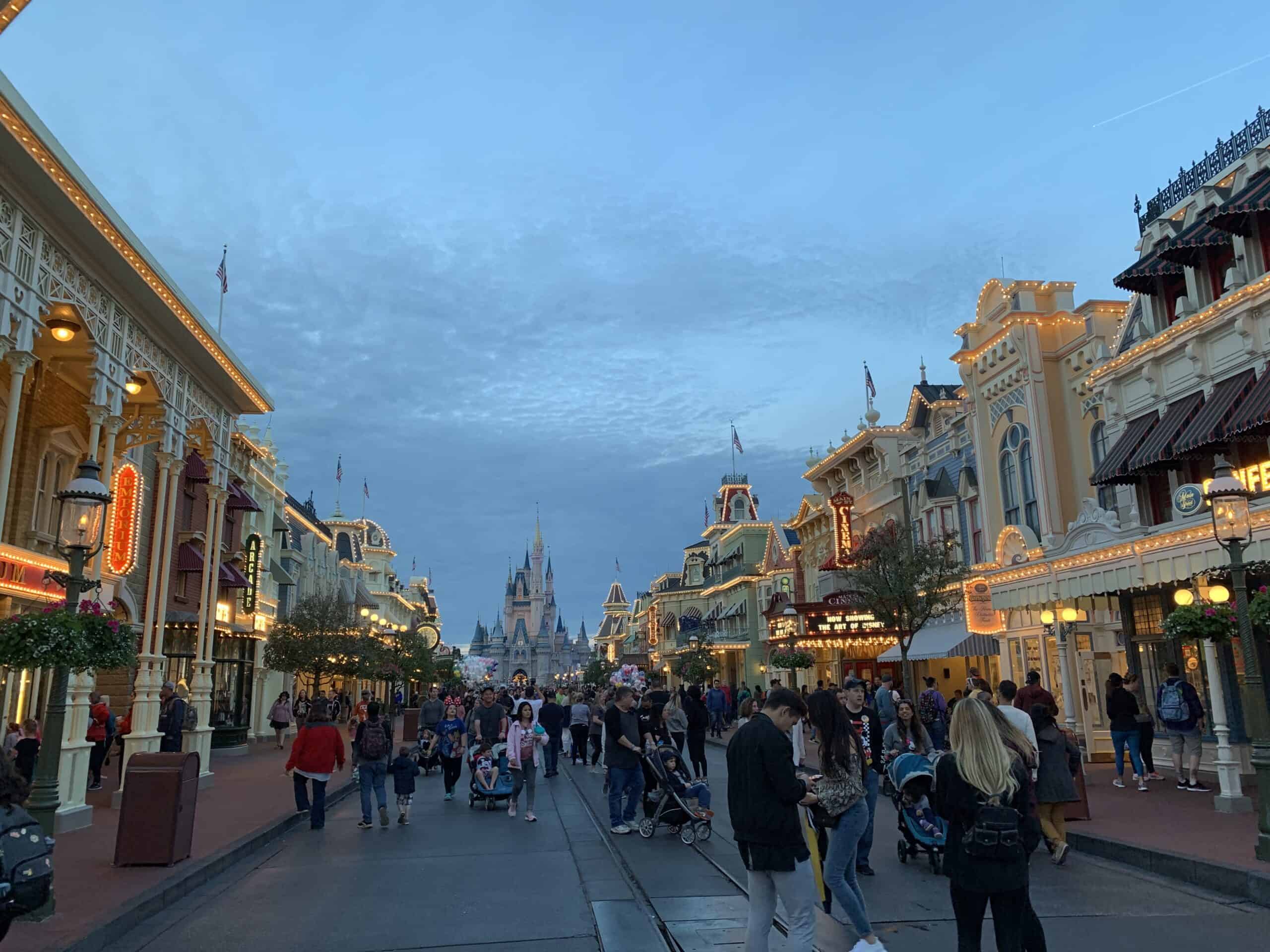 Main Street was very similar to the way that we see it today, but there were also flower carts in the middle of the street, a clock shop, a card shop sponsored by Hallmark, a penny arcade, the house of magic and a Tobacconist. 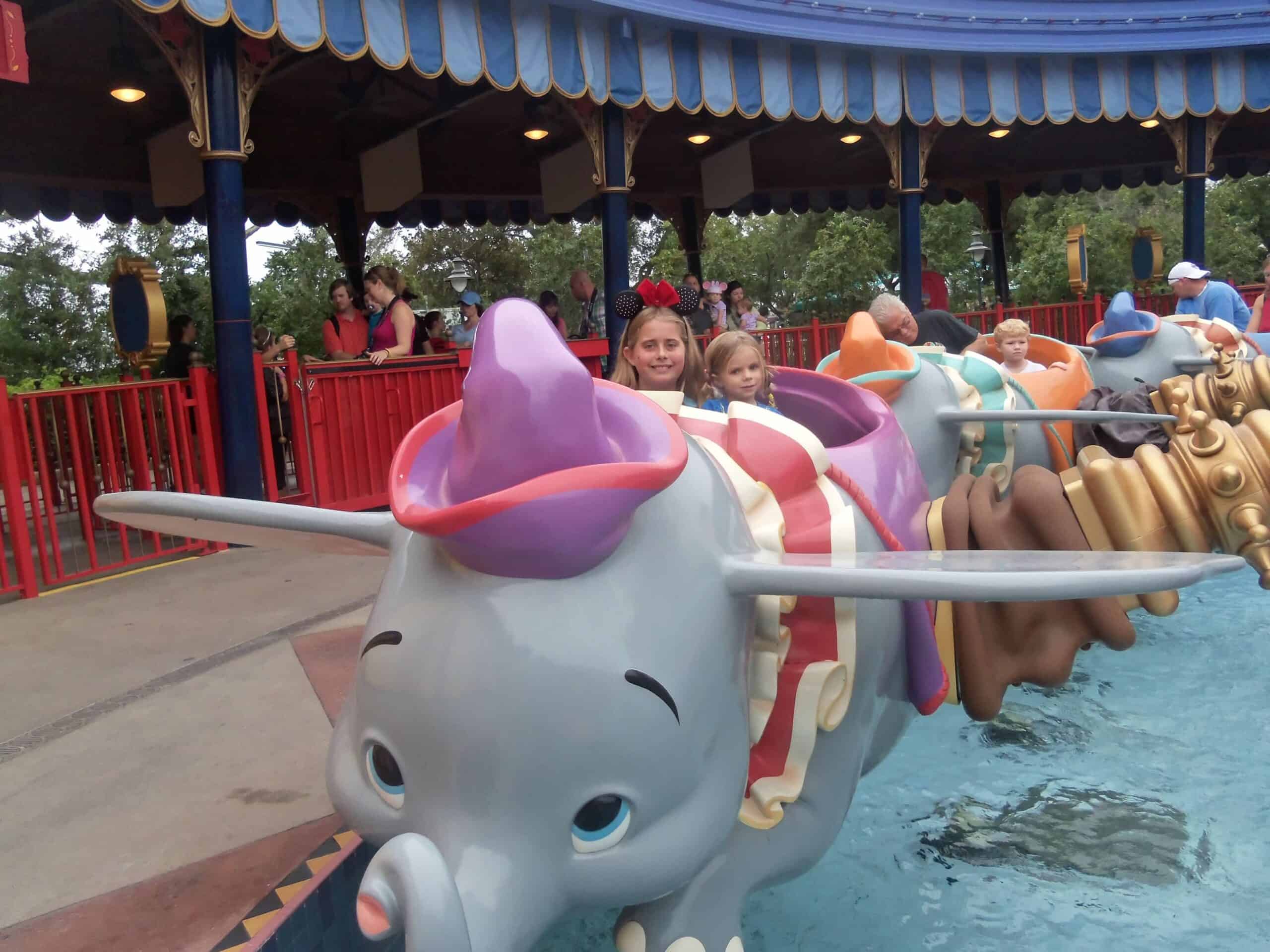 The attractions were sold by the ticket. There was an A ticket, B ticket, C ticket, D ticket, and an E ticket. You could pick one attraction from each of your tickets. Located on the front of the ticket booklet you could read the following quote:

“Welcome to Walt Disney World and the Magic Kingdom. We hope that you and your family will enjoy your stay in the Vacation Kingdom here at Walt Disney World. A multitude of recreational leisure activities is yours to enjoy. This ticket book is your passport to many wonderful adventures in the Magic Kingdom. May your stay be a pleasant one and may you return and visit us again soon.” 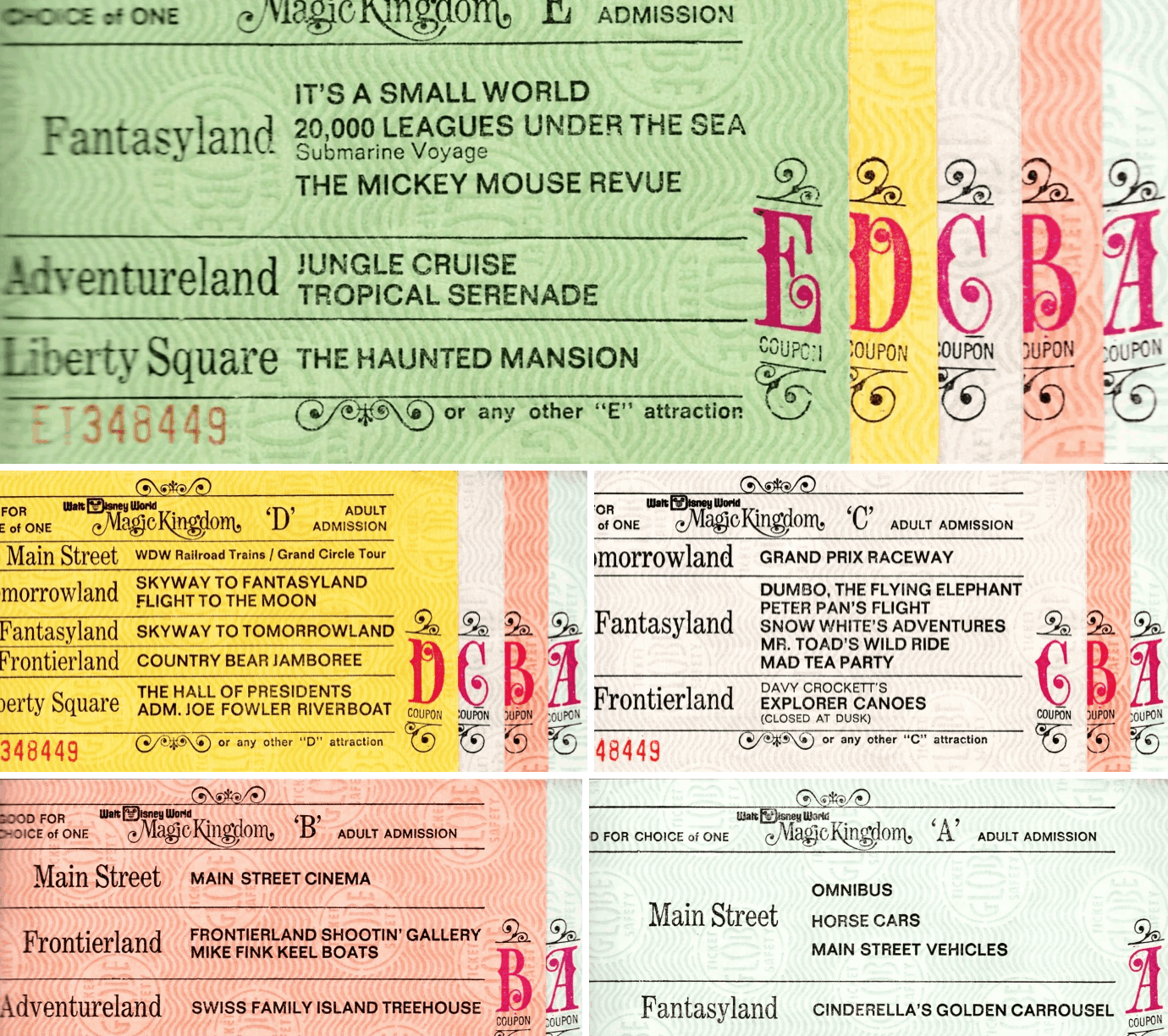 The ticket was priced at $5.75 and it would have allowed the ticket holder access to 11 adventures. The tickets are grouped in lettered categories that are based on the degree of thrill. Take a look at each ticket and decide which rides you would have chosen on this very day. 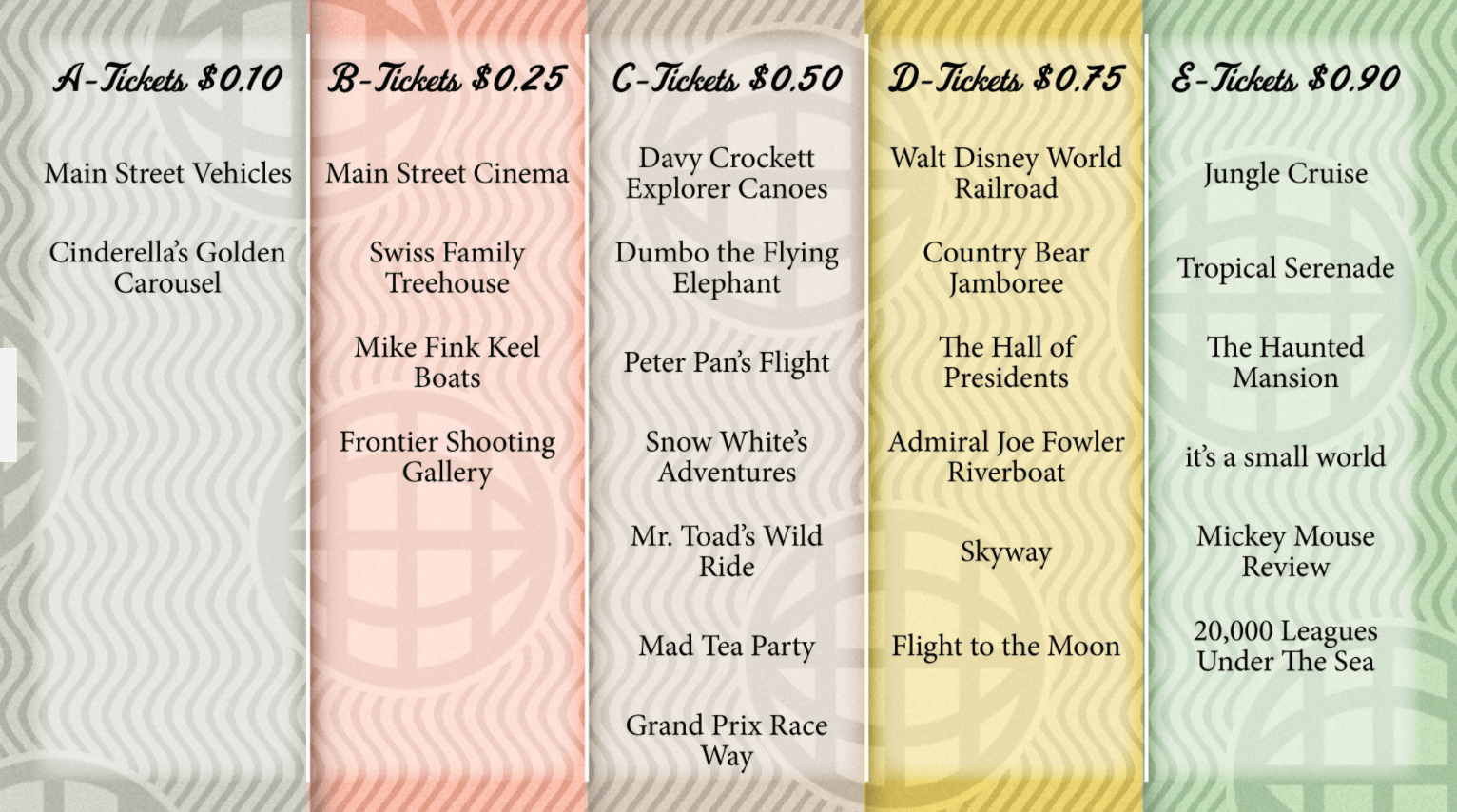 There were also tickets available to purchase for additional individual rights ranging from $.10 to $.90 per ticket as shown above.

On opening day in addition to all of the ride choices you would be able to enjoy the evenings “Fantasy In The Sky” fireworks as well as parades throughout the day.

Throughout the years, we have seen old rides put to rest while modern rides took their place. We still get excited for new ideas, new experiences, new adventures, and above all sharing in it with those we love. Walt said it best, “It will continue to grow as long as there is imagination left in the world.” 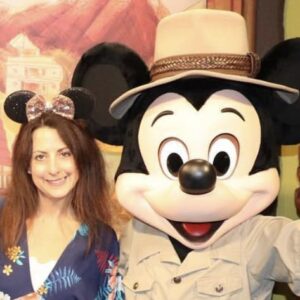 Jen Brennan has specialized in planning magical Disney vacations for Mickey World Travel since 2018. She loves traveling to Disney with her husband and three children as often as possible. When she is not busy with vacation planning, Jen is sharing all of her Disney tips and tricks on her YouTube channel, jenshappyhome. It is not hard to believe that Belle is her favorite princess, as she likes to read and dream of exploring the world just as much. If you are interested in going on an adventure in the great wide somewhere, Jen can certainly plan the perfect vacation for you.